Home \ News \ In Mexico City on April 8, 2018, the Agency for Robusta Coffee of Africa and Madagascar (ACRAM) took part in the meeting of the Executive Committee responsible for the implementation of the resolutions of the World 1st Coffee Producers’ Forum (WCPF) for the promotion of coffee and the defense of valiant small producers 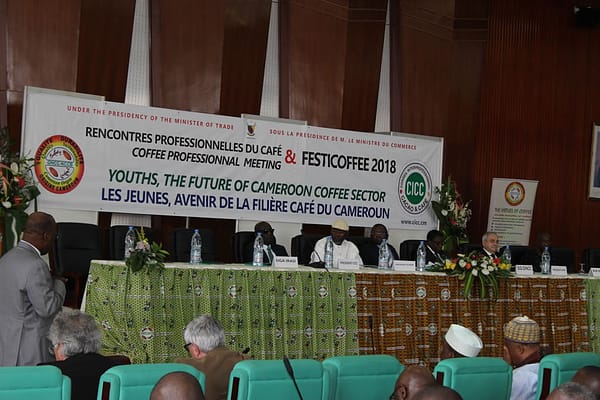 In Mexico City on April 8, 2018, the Agency for Robusta Coffee of Africa and Madagascar (ACRAM) took part in the meeting of the Executive Committee responsible for the implementation of the resolutions of the World 1st Coffee Producers’ Forum (WCPF) for the promotion of coffee and the defense of valiant small producers

According to the Final Report of a study expected in July 2019 on how to improve the incomes of smallholder farmers, a decision was taken at the first World Forum of Coffee Producers, in July 2017 in Medellin, Colombia, to conduct a study, by an independent body, for the purpose of analysing the behaviour of the price of coffee in recent years, and the cost of production and related activities.

Concrete ensued and, from 9 to 13 April 2018 in Mexico City, at the 121st session of the Council of the International Coffee Organization (ICO), Professor Jeffrey Sachs presented the summary of and strategic for the improvement of the incomes of small coffee producers».

And this, in front of the Executive Committee of the World Forum of Coffee Producers (WCPF) which met on April 8 and 12 in the Mexican capital to examine and discuss several issues related to the sustainability of the global coffee value chain, especially the steady decline in coffee farmers’ receipts over the past three decades that jeopardizes their economic viability. The official record states that the devastating effects of current coffee prices on producers deserve special attention.

Therefore, we discussed the need to take serious measures to improve the income of producers, through joint work with the rest of the supply chain on initiatives that will have to be translated into actions that will, among other things, increase consumption, increase coffee prices, respond to the consequences of climate change, and improving productivity in coffee-producing countries.

In Mexico City, delegates from the International Coffee Organization followed the initial structure of the study by Professor Jeffrey Sachs, Special Advisor to the UN Secretary-General on the Sustainable Development Goals and Director of the Earth Institute at Columbia University.

Partial results and conclusions will be presented in September 2018 and March 2019. The final report will be presented at the second World Coffee Farmers’ Forum in July 2019. WCPF representatives will ask the International Coffee Organization to play a key role in the implementation of some of the initiatives such as promoting consumption in producing countries and emerging markets and facilitating dialogue between actors in the coffee chain.

It was also agreed to start the process of formalizing the structure of the WCPF into a non-profit organization that will address and raise awareness of the challenges of the coffee value chain, especially those related to the economic and social situation of coffee producers, and will seek mechanisms that can improve their social and economic situation..

“We need to ensure that coffee production is sustainable and beneficial, while ensuring that there will be strong global demand for our product. It is crucial to coordinate actions between producers, producer associations, the coffee industry and the International Coffee Organization to increase consumption in emerging markets and producing countries,” said Silas Brasileiro, President of Brazil’s National Coffee Council.

While the board of the Association of Fine Coffees of Africa, through the voice of Ishak Lukenge, indicated that “with the current price levels, coffee is simply not economically viable for millions of coffee farmers in Africa and around the world. It is incumbent on all of us to make the coffee value chain as a whole viable, but also each of the links that make it up.”

And for Roberto Vélez, President and CEO of the National Federation of Coffee Farmers of Colombia, “it is impossible to have a sustainable coffee value chain with an extremely weak first link, coffee farmers who do not have income making their activities advantageous».

According to William Murray, CEO of the National Coffee Association of the United States of America, “with some estimates that the world will need to double coffee production by 2050, the coffee value chain must ensure that coffee production is sustainable to meet future global demand.».

At the level of the India Coffee Trust, it is already thought to bet on the quality and benefits of coffee to significantly increase India’s consumption through its middle class.

Finally, the executive director of Promecafé, René Léon, asks a legitimate question while voices call on young people to take an interest in the coffee sector: “how can we expect the next generation, our children, to stay in coffee production if they see that their parents cannot even meet their basic needs after decades of work?».

Some pictures of the meeting :