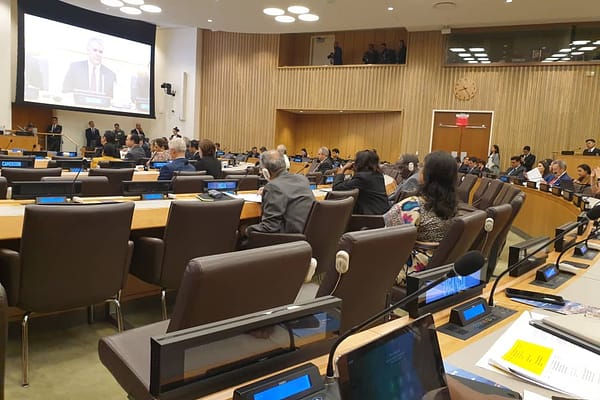 Several Heads of State and Government as well as the world’s major coffee processors took part in this meeting.

The Head of State of Togo prevented, was represented by his Minister of the Environment, Sustainable Development and Nature Protection, Mr. Wonou David OLADOKOUN.

Mr. Enselme GOUTHON, Secretary General of the CCFCC, current President of ACRAM and member of the Steering Committee of the World Forum of Coffee Producers, also took part.

The following points were raised by the members of the Steering Committee of the World Forum of Coffee Producing Countries in London as a prelude to this meeting:

1) Coffee prices have reached their lowest level in 13 years and have created a price crisis that affects producers whose livelihood depends on coffee.
2) This has affected the achievement of the SDGs, jobs and incomes and, therefore, an emergency that requires serious attention from governments and world leaders to avert the crisis.,
3) the situation has been aggravated by climate change,
4) Governments are encouraged to put in place enabling policies that allow the use of subsidized and affordable factors of production, including irrigation of coffee plantations, as a climate change mitigation measure and create an enabling environment for investment in processing and value addition, including local consumption of coffee.

At the end of this meeting, the Colombian Head of State and the President of the Colombian Federation of Coffee Producers were responsible for ensuring the follow-up and coordination of the decisions taken at this meeting..

The Colombian president has made a passionate appeal, calling on world leaders to take the coffee crisis seriously and invest the resources and actions needed to solve it, to ensure the sustainability of smallholders.

In addition, the Ethiopian Minister of Foreign Affairs spoke on behalf of Africa.

Some pictures of this great meeting :