Home \ News \ ACRAM AGM and the Symposium of Researchers on African Robusta took place from 3 to 5 April 2018 at the Mont Fébé Hotel in Yaunde under the leadership of H.E. Luc Magloire ATANGANA, Minister of Trade of the Republic of Cameroon 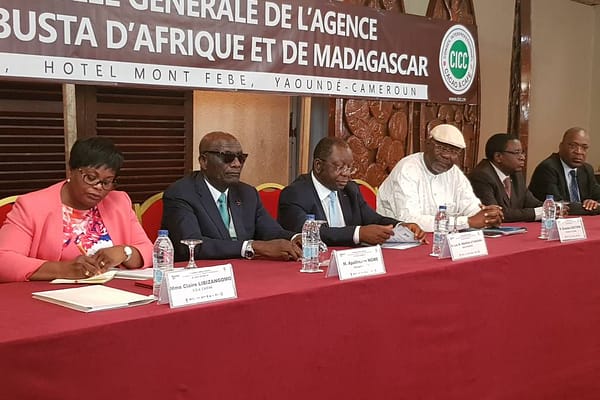 ACRAM AGM and the Symposium of Researchers on African Robusta took place from 3 to 5 April 2018 at the Mont Fébé Hotel in Yaunde under the leadership of H.E. Luc Magloire ATANGANA, Minister of Trade of the Republic of Cameroon

11 short-term decisions made on Robusta Coffees

The effects of climate changes and the ageing of producers require the coffee industry to be revitalized as soon as possible. And, increasingly, voices are calling on young people and women to embrace the coffee industry in order to make the most of it. The task of researching coffee is arduous.

Rightly, these challenges were at the heart of the discussions of the 6th General Assembly of the Agency of Robusta Coffees from Africa and Madagascar (ACRAM), and the 4th Symposium of Researchers on African Robusta Coffee, from 3 to 5 April 2018 in Yaoundé, Cameroon. Around the theme “Optimizing partnerships for quality Robusta coffee production in West and Central Africa”, after discussions on “Increasing productivity for sustainable Robusta-cultivation in West and Central Africa” at the 2017 scientific conference. Clearly, an umpteenth opportunity to solve the problems of coffee growing in Africa.

Chaired by Enselme GOUTHON, President of ACRAM, this major annual meeting of ACRAM adopted the reports of the Administration and Finance, Gender, Scientific Research committees.

As a result, countries have decided to bring the balance sheet back to accounting standards; formalize the decision to allocate to women coffee farmers in ACRAM member countries, upon presentation of a project, financial assistance of 5,900 million CFA francs to support them in their activities; set up an annual special fund of US$2,000 from each ACRAM member state structure to support researchers on the Robusta coffee tree during scientific meetings; set up a technical commission for the elaboration, by 15 May 2018, of the draft legal texts (statutes, rules of procedure, administrative and financial rules) of ACRAM; send to all members, for review and amendment, the legal texts of ACRAM; convene an extraordinary general meeting for the finalization of the headquarters agreement, the statutes, the rules of procedure and the administrative and financial rules; develop terms of reference for staff to be recruited; urgently recruit an Executive Secretary and an Administrative Assistant; adopt the 2018-2019 draft budget following the formalization of ACRAM’s organic texts at the Extraordinary General Assembly; set the place and date of the next ACRAM meetings, at the end of the extraordinary general meeting scheduled for May 2018 in Libreville; and strengthen the Promotion and Marketing Committee by appointing focal points in each ACRAM member structure.

But first, time for the opening ceremony!

On the occasion, and following the welcome speech of the President of CICC-Cameroon, the President of ACRAM finds in the “very massive and sufficiently representative” participation of the delegates, the “shared conviction of a bright future of Robusta coffees from Africa and Madagascar”. Before adding that the choice of the theme of the major annual meeting of 2018 “concretizes the dynamic of strengthening South-South partnership”. This partnership has been triggered since 2016 in Vietnam, with VICOFA in Ho Chi Minh City, through the International Organization of La Francophonie. In the Eyes of the Agency, this is indeed a logical and coherent progression in scientific reflections that goes from the sustainable increase in the productivity of Robusta cultivation in West and Central Africa to the optimization of partnerships for quality production.

This reflects the high-level expertise of seasoned researchers and a clear vision of ACRAM as a tool to promote Robusta coffees, according to Enselme GOUTHON.

It should be noted that between the General Assembly and the colloquium, the Festicoffee event held its 6th edition focused on the theme “Young people, the future of the coffee sector”. Initiated by the Cameroonian government, it now seems to be one of the largest events dedicated to coffee in West and Central Africa.

Some pictures of this great meeting :