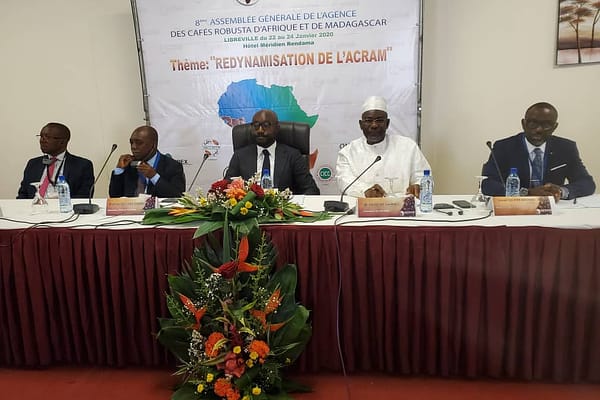 After three days of work, the actors of the coffee sector, meeting in general assembly of the Robusta Coffee Agency of Africa and Madagascar, from 22 to 24 January, took decisions for the valorization of this product.

The Gabonese Minister of Agriculture, Biendi MAGANGA MOUSSAVOU, officially opened, on January 22, 2020 in Libreville, the work of the 8th General Assembly of the Robusta Coffee Agency of Africa and Madagascar (ACRAM) under the theme: “The revitalization of ACRAM”.

For Biendi MAGANGA MOUSSAVOU, the choice of the theme fits perfectly with the ambition to improve the coffee of African states.

«We need to strengthen exchanges between Robusta producers, develop material production programs, reorganize marketing channels and attract our youth to the professions of the coffee industry. This work in Libreville reinforces Gabon’s position on the direction of its agricultural policy, whose reforms contribute to the revitalization of the coffee sector,” said Biendi MAGANGA MOUSSAVOU

At the end of the work of the 8th General Assembly of the Agency for Robusta Coffee of Africa and Madagascar (ACRAM), the members of this important coffee association adopted solid resolutions to address the concerns of the central theme of this session: “revitalization of ACRAM”.

The report of the Gender Committee, for example, was particularly applauded and adopted without challenge. It highlighted ACRAM’s desire to see more women involved in the coffee production chain. A working group will be established on this issue. Which one will be responsible for setting up the terms of reference, on the basis of the support programme for women’s economic empowerment in the sector?

In addition, considering the 2018-2019 financial statements presented by the Executive Secretariat, the Assembly decided to adopt the activity report presented to it. In order to improve the productivity of ACRAM members’ coffee farms, the decision to develop conventions and concrete partnerships was adopted. Indeed, ACRAM intends to boost domestic consumption of Robusta and is partnering with the IACO, encouraging an African free trade area favourable to the coffee sector.

At the end of the meeting, all participants were invited to take part, next March, in Cameroon, in the major exhibition of the “Festicoffee”, one of the general public events of coffee in Africa.

The ACRAM office also took the opportunity to visit the permanent headquarters of the ACRAM Executive Secretariat in Libreville.

Cameroon will host the next General Assembly in March 2021.

Here are some pictures of the 8th General Assembly :